US Airways announced this week that their shareholders had endorsed the proposed merger with American Airlines. This is one of the final steps necessary to complete the merger. Approval must still be given by the governmental agencies responsible for the oversight of mergers.

Voting among the Mechanic and Related classifications of US Airways for representational rights between the IAM and IBT began this week. As is the procedure followed by the National Mediation Board individual voter identification information was mailed to eligible voters and has begun to be received at each person’s home. By the determination of the NMB, members of District 141, performing work recognized under the representational dispute, are considered eligible and will receive their voting instructions also. We encourage all eligible District 141 members to participate in this election and support the IAM and our brothers and sisters in District 142. Experience has shown us that every vote is important and affects the results. The futures of IAM members at US Airways, regardless of classification, will be impacted by this vote. The strength of our recently announced alliance with the TWU in a post-merger American Airlines and its impact on collective bargaining are at risk. Please participate in this vote if you receive voting instructions and encourage all US Airways eligibles to vote too. 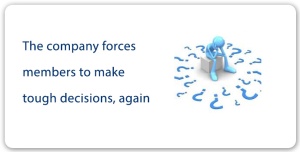 Negotiations with United Airlines resumed this week. The focus was on looking for ways to address the recent announcement by United of intent to contract out the current work in CVG, GRR, ROC, ALB, MDT, and TUS. The company informed the IAM that they intended to take action to turn all ground handling work over to a vendor – American Eagle – in all six stations, effective October 15th.

We reviewed the financial differences between our members continuing performing the work and also expanding the United operation and replacing the existing vendor or losing the work completely to American Eagle. The cost differences created a large obstacle that had to be overcome. On average, the cost savings to United of removing their own employees and turning over the critical work of these stations to their competitors was about 35%. In some cases, in actual dollar amounts, the difference was greater than $1 million a year. These figures are based the current cost structure of our PCE Agreement and are not speculation of future costs. END_OF_DOCUMENT_TOKEN_TO_BE_REPLACED

7/9/13…..Long time Local 1726 member Steve Miller (USAir) accepted a Trustee position for District Lodge 141. Steve joins a long and distinguished list of 1726 members that have moved up the IAM ranks to positions in the Grand or District Lodges.

Steve is looking forward to becoming a productive member of the Board and says that Local 1726 will have a voice in the District. “It’s now, and always will be, about my Brothers and Sisters; they are the Union. It’s a honor and privilege to serve them.”

Congratulations to Brother Miller. We know you will make us proud.

Letter from United Airlines of their intent to contract out six stations: July 08, 2013

This morning, Monday, July 8, 2013, United Airlines notified District 141 of their intent to contract out the remaining work in six stations – CVG, GRR, ALB, ROC, MDT, and TUS. They notified us that employee meetings will be conducted over the course of the next week to inform the members in these stations as to the current status of the decision making and the potential for discussion with the IAM to find alternatives to outsourcing CSR work in these line stations or negotiate the effect of such contracting out on the 225 members impacted by this potential decision.

The company cited their right to make these decisions under the current UAL/IAM Public Contact Employee Agreement – Article II, Paragraph C, 5 – that permits some contracting out even in the face of furloughs but requires the company to meet with the IAM to discuss and negotiate the impact on members. This is the same contract language that was tested several years ago in arbitration over the establishment of the “D” position in lobbies using vendors instead of IAM-represented United employees. All of the affected stations are former s-UA stations staffed by Customer Service Representatives and does not affect any s-CO employees as these stations had been fully contracted out years before IAM representation began. As called for under the current agreement, we will meet with the company promptly to begin the discussion process. We are scheduled to begin these talks on July 16, in conjunction with the return to collective bargaining for a replacement agreement.

We have already responded to the company and challenged their right to contract out the work in question and displace the members involved and will pursue any and all options to keep these stations viable and secure for the future.

As we have noted in messages over the past years, job security is the main focus of our negotiations. Some of the provisions of the recently rejected tentative agreement addressed this situation and provided alternatives or options for employees such as an Early Out Program and enhanced severance pay. While those specific provisions are not currently in place due to the rejection of the overall tentative agreement, we intend to aggressively return to these subjects, along with other job security topics, to provide our members with the most complete job protection possible.

As many people are aware, United Airlines management in BOS is looking to integrate the S-UA and S-CO workgroups. Since we are in separate terminals and have been operating separately since the merger, it is our stance that the Aircraft Redeployment Agreement prevents this from happening.

DL 141 PDGC/President Rich Delaney agrees. He has spoken to Labor Relations and the plans to integrate the subsidiary workgroups should cease. Your Committee Leaders Mike D. and Bob B will be having meetings with the station leadership to discuss this and ways to efficiently move forward for the March ’14 move to terminal B if we do not have a joint contract by that time.

Any developments in this matter will be posted.

The parties met in negotiations on June 17 and 18, 2013, with Mediator Mike Tosi. We discussed various
company proposals including station manning, the proposed outsourcing in Customer Service and the closure of the US Customer Relations Unit.
Once again, the Union made it clear to the Company that we were not interested in outsourcing our work
and subcontracting out eight stations, the Baggage Room and Customer Relations. We stated we were willing to explore all reasonable cost saving measures. END_OF_DOCUMENT_TOKEN_TO_BE_REPLACED

US AIRWAYS MECHANIC & RELATED
NEGOTIATIONS UPDATE / RECAP
Our last negotiation meeting was May 3, 2013 in Houston, Texas. The National Mediation Board (NMB) Mediator Walter Darr has not scheduled any future negotiations at this time.
As you are aware this coming July 1st you will receive a 3% base rate of pay increase. This will be the
second 3% base rate of pay increase since the amenable date of the current Collective Bargaining
Agreement (CBA). These increases are outlined in Article 23 and while such a clause is not common
in the airline industry this is the second time the IAM has negotiated such a provision into your
contract.
END_OF_DOCUMENT_TOKEN_TO_BE_REPLACED

Throughout the past week District 141 conducted information meetings for US Airways members across the country regarding the status of contract negotiations. More than 80% of members had the opportunity to listen to and talk with members of the District 141 US Airways Negotiating Team and understand the current state of our talks with the company. The provisions of the Railway Labor Act were explained so members could understand where we are within the legal negotiation process and what it means to officially seek a release from mediation. The exchange of ideas and comments was very productive and helpful to our Team. Meetings will continue during the coming weeks as we await instructions from the National Mediation Board as to a return to the bargaining table.